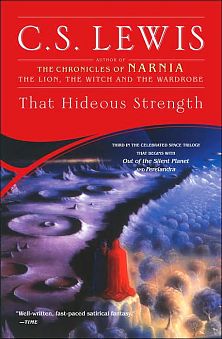 Recently finished this book, and now I have read all three in Lewis’ Space Trilogy.

In a couple of (probably superficial) ways I strongly identify with C.S. Lewis – his rich inner thought life, his aesthetics, his faculty for argument, and a perfect storm of experiences and psychological makeup that left him single well into his fifties. (Still waiting to see on that last one.) I feel too well in myself the weak sides of these things – never yet their strengths, as I usually see them in Lewis’ work – so I winced when I read this book, a panoply of the weak sides of Lewis’ power.

C.S. Lewis does a good job painting pictures and scenes. His sketch of the interminable, frustrating uncertainty of NICE’s working atmosphere is a convincing one that sets up some real tension. The note of discord in Jane and Mark’s marriage is effective as well, creating a bittersweet interval on the very first paragraph that only just touches resolution on the last page.

He also does a great job at calling up a sense in the reader of some aesthetic of life & love which is beautiful, severe, and indescribably old; but the effect is an intermittent one.

Themes which Lewis loves to revisit and normally excels at seem somehow wedged into the narrative and overdone: the idea of wanting to get into the Inner Ring, the spiritual bankruptcy of progressive education, the fascination with self-deception. In fact, this triumvirate, in varying proportions, could almost be said to form nearly the whole basis of the book’s main characters. One gets the impression (mistakenly, I think) that Lewis’ understanding of human nature was perhaps a little overdeveloped on these lines, while lacking in others.

In the same way, I felt that Lewis’ perspective on marriage, which fights to make itself known throughout the book and never fully succeeds, showed signs of having come from a man whose ideas of marriage had been mostly theoretical and not personal. Perhaps that is a perspective worth listening to, but one tends to doubt of its utility.

The story itself is a real page-turner, but also full of holes because of Lewis’ unsparing use of the supernatural and mysterious. The conspiracy and manipulation-of-the-masses parts of the story are handled with a breeziness that ranks with the most mediocre “end-times” fiction (Illuminati, et. al.).

A final regretful thought as regards the accuracy of C.S. Lewis’ premonitions about Progressivism’s destructiveness (better understood in The Abolition of Man than in this book). He is still being proven thoroughly correct, it is true, except that he seems to have thought that progressives would end by destroying Nature along with Man. He did not guess that the progressives would end by purporting to take up Nature’s cause, and by pitting Nature and Man in a false conflict with each other.

Despite what it sounds like, I enjoy this book; in fact, I look forward to reading it with my wife (in thirty years when I’m married, that is). But I enjoy it better when I imagine that this was a first draft of Lewis’ that the publishers somehow got ahold of by mistake.