Nocturne: in a new suburb by Tadeusz Deręgowski

How do suburban landscapes affect the people who live there? What impressions do they leave on you on first encounter, or after long exposure?

The first literary references that come to my mind are not favorable ones. In A Wrinkle in Time, when Meg and Calvin make their first incursion into Camazotz, a planet that has completely succumbed to “evil”, they first encounter that evil in the form of a Monotonous Neighbourhood:

Below them the town was laid out in harsh angular patterns. The houses in the outskirts were all exactly alike, small square boxes painted gray. Each had a small, rectangular plot of lawn in front, with a straight line of dull-looking flowers edging the path to the door. Meg had a feeling that if she could count the flowers there would be exactly the same number for each house.

C.S. Lewis did much the same thing in The Great Divorce. The idea of an endless grid of identical houses serves, for him, as a vision of hell itself:

Several hundred feet below us, already half hidden in the rain and mist, the wet roofs of the town appeared, spreading without a break as far as the eye could reach. …We were now so high that all below us had become featureless. But fields, rivers, or mountains I did not see, and I got the impression that the grey town still filled the whole field of vision.

He could almost be flying out of Boston or D.C. with that kind of description. Lewis describes an infernal social dynamic whose result strongly resembles urban sprawl. 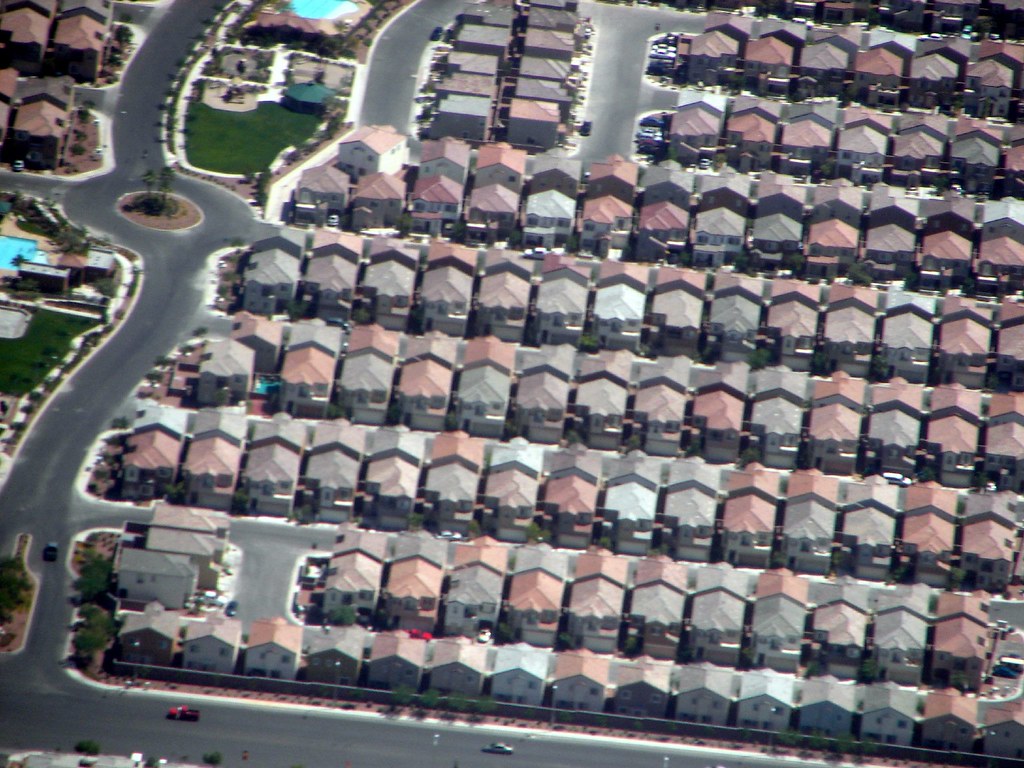 Further notes to this post will focus on other “found impressions” of the suburbs by authors, artists, journalists, and architects.

That movie [The Virgin Suicides] has informed a lot of how I see growing up and looking back and trying to make the awful parts of being a teenager feel beautiful. On that note, you have a very unique way of looking at the suburb where you live, which I think you’ve called “the Bubble.” When did you realize the suburbs could be a source of inspiration?
[…] I am into that whole Virgin Suicides vibe of making even the bad parts bearable. I hate high school so much, but there’s something kind of cool about walking around on the coldest day listening to “[Lindisfarne]” by James Blake or something and feeling like something has happened, even though it’s the worst thing ever. The album The Suburbs by Arcade Fire was influential to me in that as way well. I just think that record is really beautiful and nostalgic and so well-written. It’s a super-direct way of talking about what it’s like to grow up [in the suburbs], and I think that’s quite lovely.

Sprawl II (Mountains Beyond Mountains), from The Suburbs album by Arcade Fire, mentioned by Lorde in the above note.

I find it notable that the song cuts to a Shepard tone midway through: a sound that always descends without ever actually going anywhere.

One of my favorite groups on Flickr is “Suburbanality.” Its contents are quiet commentary on the good and the bad of the suburbs.

[THE LOCAL YARN CHIPS IN: Here's the link!] The painter Scott Lloyd Anderson, on his series Paradise Paved:

If beauty is not inherent in the built up, car clogged environment we’ve created, can I nevertheless employ my skills with light, color, and design to create an engaging painting of that landscape? Let me know what you think.

Art often works by drawing our eye to beauty in unlikely places. But it seems that every attempt to create art around suburban landscapes begins with an admission that the suburbs are inherently ugly.

I have to admit I am a fan of the despair that is unique to the suburbs. It is neither the sinister loneliness found in a Flannery O’Connor story nor the claustrophobic hopelessness found in a movie like Se7en. No, suburban despair has the unique aspect of highlighting the tension between how we appear to the world and how we actually are. To put it fancier terms, it highlights the difference between being and seeming. One film that is chock-full of examples is American Beauty, and I’m just going to point out one, Lester played by Kevin Spacey (clip likely NSFW).

Lester feels like a bumbling oaf, yet feels that he is meant for something else. He seems to be something, yet is something else. This pains him to be, in the words of Holden Caulfield, a phony. Now the rest of his actions in the film are hardly defensible as he tries to become himself. By the end of movie, as he is about sleep with an underage girl in what is supposed to be the crown jewel in his project of self-actualizing, he realizes that this childish striving is futile as well. He unfortunately meets a tragic end just as he realizes this.

As creatures, finite and temporal, we are constantly becoming and never static. We are painfully caught between what could and ought to be and what we are. With the ability to have rich inner lives comes the burden of appearing and being. The realignment of our disparate nature is a life’s work. The aesthetic of the suburban, grossly inorganic and sterilized, make us painfully aware of this tension.

The end of neighbors →

It’s hardly surprising, given how lengthy working days, long commutes and having both parents in the labour force have combined with the way we raise our children to create suburban neighbourhoods that are empty more than half the day, with scarcely a neighbour to encounter, let alone recognize, trust or befriend. But, however powerful the economic and social forces behind the disappearing neighbour—and however positive many of its results—according to reams of new research, the transformation is also poisoning our politics and, quite literally, killing us.

Two new books, The Vanishing Neighbor by Marc Dunkelman, and Susan Pinker’s forthcoming The Village Effect, mine the data and sound loud warnings.