The continued circumstances of the Regular Vein 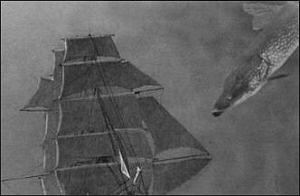 It was Foget’s watch again, the night watch. It was very dark and the wind had died down only a little. He crouched in the crow’s nest, fixated on the pages of a small book, in an island of lantern light barely big enough for a grown man to crawl into.

Outside and all around, dark and black darkness. There were no stars or moon tonight. There was not a sound below, nor would he much have heard it up there, forty-two feet in the air, if there had been one. It was unusually warm.

The last sand dropped into the bottom of the hourglass, and, as if on its own, Foget’s hand whipped out and flipped it over, smack, on the other end. The hourglass may not flow evenly, but to keep the sands moving is an imperative. No one ever thought about what would happen if someone forgot to flip the glass. No one ever forgot. And you always gave it a good smack to send the first few sands on their way down a little faster, to make up for even the most fractional delay in flipping it over. It was, you can imagine, a very durable timepiece.

Foget sighed and closed his book, but kept his thumb inside to mark his spot. He supposed it was time to give some attention to duty. Looking out, he saw nothing; he even held the lantern up as though the light would in aid in the looking. We now know that light is composed of particles called photons. Well, a swarm of photons bounded out of that lantern, and each one, as soon as it had gone, was seperated from the others and got lost. Some of the photons eventually stumbled up above the clouds, and from there went shooting off clear into space; and some were drowned in the heart of the ocean; and some churned about in ever-widening circles until morning came. But none ever came back to give a report to wide-eyed Foget, to say whether there was an end to this flood of darkness.

He stood there and stared for awhile, then turned about to look in the opposite direction, and what he saw froze him. Something as long and thick as his arm was undulating in the warm breeze, hovering a few feet outside the crow’s nest. He saw only its small eyes at first; they reflected only the faintest hue of dark, dark green. The rest was hardly more than a shadow against shadows. There was something about the way it moved… Of course, he thought, It’s a fish. It was a large northern pike, floating in the air, its body swaying as though it were swimming. Its head was tilted downwards as though it had descended from somewhere higher up.

As he watched, he held the lantern up a little more, and felt a whisper of air in his ear. Another fish had swam quite close to his head; his hand moved up to brush it away, and then his eye caught sight of it moving above him. He tried to keep it in view, the way you look for an insect that has just tried to land on you — “If it comes close again I’ll give it a good brush-off,” he thought — but he could hardly make it out. A couple of times he thought he had lost it, then saw it again in quite a different place. It wasn’t until he gave up looking that he noticed more movement in the darkness close by, and then he realized: there were more than just two fish. There were a lot more. As he looked down to the lanterns on the ship’s deck, far below, he could see their shapes crossing the dim lights.

The lantern — switch it off, switch it off, you fool! But he did something different instead. He dropped it and left. When he looked down, there was the ship beneath him, and his eyes adjusted. He was now himself floating near the topmast. He had gone to scramble onto the rigging and had ended up swimming up into the air. He could see a tight knot of huge fish circling in around the lantern he had dropped — which filled him with relief and dread. Slowly they drew off back into the darkness. Instinctively, he drew back himself.

Foget wondered whether to swim below and get a gun or warn the crew or something. “No no; they’d see me by the lights, or surely bump into me in the dark; I’m as good as invisible here. Maybe they’ll go away soon.” He stayed watching for awhile. “I hope no one on ship will come outsside, or they’re done for.” All the while, he heard, or felt, a very low vibration growing louder. “What is—”; suddenly he was pushed aside by a thick, turbulent current of air.

One wave whirled him aside, then another much more powerful, and the third was a cold shock. He spun in circles, and kicked furiously, trying to get control and get away. Away beneath, all the lights on the ship went out. Something very large had moved very close by.

The clouds parted, and the moon’s rays dappled and pushed around him. He was much farther above the ship now.

A couple hundred feet away, stood a thing whose sheer size transfixed him with awe. It was an eye, a very great eye. But the eye was itself set in the head of a blue whale that would not have fit, it seemed, in a normal ocean of water. Foget, if he could have moved, would have had to turn his head from side to side to view its whole length. It stood, a colossal azure wall, in front of him, blocking out a great part of the stars. Where shafts of moonlight illuminated its skin, it was shown absolutely clean, without a barnacle or a scar.

He took a sudden deep breath like one awaked from sleep. All the fish stirred too, thousands of them, and looked up in his direction. They glared at him. They bristled. Then they shot upwards. Almost before he had time to feel terror, they were nearly upon him. The clouds had descended too, and thickened around him just before the fish reached him. Then his terror increased nine times, for he realized the clouds were made of mosquitos, and they were going to devour him. With frustration and despair, he tried to slap them, to brush them off, then to swim away. But three thousand tiny wings whined in his ears, six thousand tiny feet landed on his skin and a thousand needles began probing for veins. Foget gnashed his teeth and was about to scream: but in an instant the air was as thick with fish as it had been with mosquitos. Foget was enmeshed in a cloud of writhing, snapping pike, who consumed the mosquitos furiously. The mosquitos likewise warred against the fish, even skeletonizing many; others they reduced to horrifying scraps of flesh, barely alive, before being in turn repulsed by other fish. Some of the fish were confused and attacked each other. It was all a blur.

Foget was helpless; of course he would have taken the fish’s side, but he was a clumsy swimmer and the most he could do was try to slap a portion of the mosquitos that landed on him. He kept seeing that gigantic eye looking at him through the hordes of insects - the whale. No expression, no motion, the operation of his huge lungs barely audible.

Far, far down below them, the Regular Vein was on fire. Distant, muffled explosions from the ship’s hold caught his ear. He looked down, and his eyes focused on the hourglass, whose white sands were nearly gone.

Then whatever had suspended this theatre of fish and sailors in the air suddenly gave way, and Foget was falling. Down he went and ever faster, and the fish were all around him falling too. Foget couldn’t decide whether he hoped he would miss the ship or whether he would hit it. Then he saw that the whale was falling too, and realized it didn’t matter, for when the whale hit the water it would be the end of the world.

The whale, the sailor, and thousands of dead and living fish, all hit the water at exactly the same moment. The sound was sickening.

The last sand dropped into the bottom of the hourglass. Smack, Foget’s hand whipped out and flipped it over. He sat up, rubbed his eyes, and it was morning. It was colder, and raining. His book showed signs of having been set on fire by the lantern - and so did his hair, although he didn’t know it yet.

Bill Norr, who had just come up to the crow’s nest for the next watch, observed the burnt book and hair, the knocked-over lantern, the bloodshot eyes of the bedraggled, wet sailor.

Foget looked at him with wide eyes, and was about to speak, but he stopped, leaving his mouth hanging open. Bill motioned him to climb down. As Foget got up and looked out over the ship, he saw it was covered in fish bones.

“The whale fell directly over him, and probably killed him in a moment.”
—Rev. Henry T Cheever, The Whale and his Captors