Shakespeare at the Opening Ceremonies 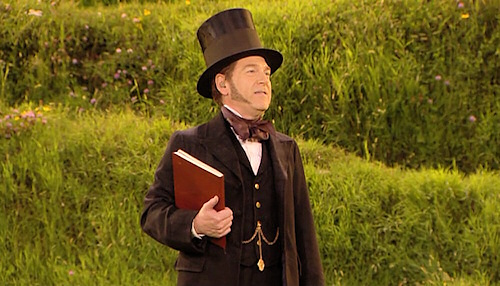 At the opening ceremonies for the 2012 Olympics in London, Kenneth Branagh appeared on stage in the character of Isambard Kingdom Brunel, a famous British engineer, and delivered these lines to the world in his grandest style1:

Be not afeard. The isle is full of noises,
Sounds, and sweet airs, that give delight and hurt not.
Sometimes a thousand twangling instruments
Will hum about mine ears, and sometime voices
That, if I then had waked after long sleep
Will make me sleep again; and then in dreaming
The clouds methought would open and show riches
Ready to drop upon me, that when I waked
I cried to dream again.

The lines are originally spoken by the character of Caliban in Shakespeare’s The Tempest.

It seems this bit of Branagh’s wrought all manner of confusion among viewers and journalists. Many people wondered why he was dressed as Abe Lincoln. USA Today also cited Shakespeare expert James Shapiro as being confused by the choice of lines, and by their juxtaposition with Brunel:

“The lines are quite beautiful, and I guess they wanted to rip them out of context and talk about how magical a place the British Isles are.” […] Brunel standing on a hill in the countryside, delivering the speech to a bunch of wide-eyed Brits, had “absolutely no relationship” with Shakespeare or the Tempest.

“Why give him the lines Shakespeare wrote for a half-man, half-beast about to try to kill off an imperial innovator who took away his island? I don’t know,” Shapiro said.

I see this reaction as further evidence of the modern trend towards “de-dreamification” of thought. These ceremonies were not supposed to be an academic lecture or a master’s thesis. This is theatre — and, like all theatre, essentially more like a staged dream. In dreams, connections are not made by logical and categorical connections, but by shades of emotion. In dreams, we layer on things that seem disparate but that share an emotional connection — it is this type of thought that allows us to make leaps of artistic and creative intuition.2

So what we see here is actually an extremely poetic and dream-like layering of elements: Shakespeare’s words, combined with the character of Isambard Kingdom Brunel — the man who built the Great Western Railway and several revolutionary ship designs — in the context of the British Isles just before the Industrial Revolution. Instead of being a dull recitation, the words are injected with a wild, new meaning by setting them this way. (I have my own thoughts on this but I’d love to hear yours in the footnotes.)

Tom Gliatto almost figured it out when he said, “In his movies he loves to jam together styles and images and effects, and so he did here. This was Trainspotting minus heroin.” He meant it as a slap, but, coming from a critic, it actually proves both that Boyle nailed his desired effect, and that Gliatto wasn’t in the mood (or just doesn’t know how) to dream.

Although it ended in a regrettable muddle about the internet and pop music (much like a real dream might), Branagh’s bit, along with several similar combinations, made the ceremonies enjoyable and memorable.

Having never read “The Tempest,” I probably had the least context and so very much enjoyed the recitation. To me, it spoke of the grandeur of Great Britain’s place in history and culture and it’s influence across the globe. I though it was a fitting introduction to the games hosted in London.