Here is something I have had in my pocket for a couple of years. 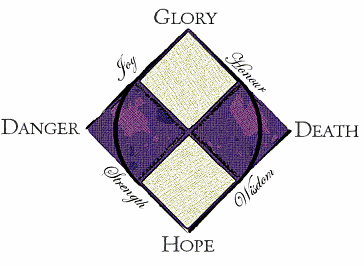 Why do Hope and Glory lie on the vertical axis?
Because the movement from Hope to Glory is a process of struggle.

Why do Danger and Death lie on the horizontal axis?
Because the presence of each is a constant.

Hope is the birth of a goal.

Why are the optimists right about Hope?
Because without faith there is no achievement.

Why are the optimists wrong?
Because no goal of man is certain until it is actually achieved.

Danger is the unavoidable threat to the goal.

Why are the pessimists right about Death and Danger?
Because to ignore or make light of them is foolish.

Why are the pessimists wrong?
Because without faith there is no achievement.

Why is danger continually present?
Danger must always be present because your time is limited. Danger is inversely proportional to time remaining. If
you had an unending supply of time, the degree of danger would be zero.

What is the fundamental danger?
Lack of time. If time is in infinite supply, any danger can be certainly overcome. But time is always limited.

Death is the irreversible end of the struggle.

Where is the danger when death occurs?
Death eliminates danger because the struggle is ended.

Why is death desireable?
Because death is the shortcut through struggle.

Why must death be avoided at all costs?
Because without struggle there is no glory, and forfeiture brings shame.

Why do many of us foolishly desire death?
Because of our tendency towards mediocrity and selfishness.

Why do many of us fear death?
Because of our tendency towards mediocrity and selfishness.

Glory is the goal realized.

Is glory an inevitability?
If there is an unending supply of time then glory is certain. Where time is limited, glory is uncertain, and there is danger of failure.

Why, then, do not all of us hope after something of timeless significance?
Because of our tendency toward mediocrity and selfishness.

I tried to maintain parity between questions and answers, but at the end of the piece there are always more of the former and I haven’t been able to get rid of them entirely.