More notes from the aboard the *Regular Vein*. 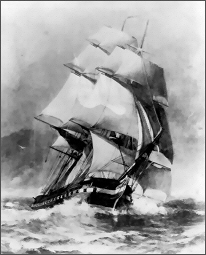 It usually comes as a shock to people when they first get out on the water, when they realize that they can only stay dry and get where they’re going by harnessing powers they have no control over.

In other words, they have no idea what they’re doing.

There was a time, when the crew of the Regular Vein was extremely green, that everyone’s faces were rather long and everyone’s skin was thinner than cheap bacon.

“Get your fangs out of my neck! Here’s your halyard, snake!”

The ship was bumping and lurching around the harbour, in full view of the whole town.

It was sunny, windy, and cold, and the waves kept knocking about in all directions while the ship waffled around. A few of the weak-minded sailors envisioned that maybe somehow by pure chance they could bring the boat out of the harbor and dash her on the rocks somewhere, in a more private setting, and have done with it.

The first mate was standing by the helm, grinning broadly as always. No one had yet seen the captain. The Port-Sands Mariner, who had evidently stayed on from a previous crew (and perhaps one or two before that one as well), was trying to steer the ship. But the wind was coming into the harbour at a bad angle, and to have to tack back and forth with a bunch of know-nothings was a very bad business.

From aloft in the rigging, the sounds drifted down of a crew coming together as a single cohesive unit, learning to work as a team.

“Can’t you see it’s tangled there in amongst that jib-thing?”

“Can’t you see I’m working on it you fatheaded hypocrite? And it’s not called a jib-thing!”

“Well why don’t we print a stack of labels and plaster them all over the whole unhappy boat and then maybe we’ll be able to satisfy your unnatural thirst for jingo!!”

“You have to learn to communicate! We’ll never get anywhere if you don’t communicate with me!”

One wide-eyed and particularly know-nothing new sailor, named Foget, was scurrying about in a state of quasi-desperation, trying to help, if he could, by sheer activity. He noticed a loosening knot and went to tie it; then one end of a rope swung down from somewhere above and he tried to figure out who had dropped it and whether it had been on purpose; then he tripped over a step.

Foget did not hear him, however, and as he stood up, the boom swung around from behind and struck him right overboard.

As he fell into the water, he heard Port-sands’ disgusted voice. “For the love of Pope Alexander! Hit another one right over the blasted fence. I’m batting a thousand today. Why can’t they just keep their eyes open…”

Foget’s eyes were indeed open as the water came up to meet him, and he plunged into the cold blackness. In fact, his eyes would not close. He was naively surprised to see how black the water was, when it looked blue from above. He was head downwards and in horror for a moment he stared at the bottomless emptiness yawning up at him; then in a panic he began to struggle furiously, mindlessly. He caught a glimpse of sunlight, but then it was gone again, as though the muddy world was flying by and he had missed his stop.

Then his hand grabbed something and tightened around it; and he was jerked forcefully into the air, into the realm of the living.

He had just become re-accustomed to the clarity of the air, and of the cold wind on his wet body, when he reached the deck of the ship. He came face to face with the first mate, who was hauling him up, grinning.

“Your eyes are pretty big, Foget, but not big enough it seems.” Foget could only stare at him and shiver.

“This ship has a system. I suggest you use that head and figure it out before you get another ducking. We don’t wait until the next port to get rid of unneeded extras, and the water only gets deeper from here.”

His kind smile was belied by the harshness of his words. Foget never forgot them. And ever afterwards, whenever he saw that great smile, far from being encouraged, he felt vulnerable and watched.

They did eventually make it out of the harbor, and at night the wind died down, and the hands whose watch was over were very grateful to go and hide in the forecastle. Sleep hard, not well, sailors! Things are always hard before they are easy, and there’s no going back to your boyhood bunk bed with the cracked yellow paint, and the Cream of Wheat breakfasts.

“Human beings are the only creatures that allow their children to come back home.”
— Bill Cosby (1937–)