A Compost Bin From Old Drawers 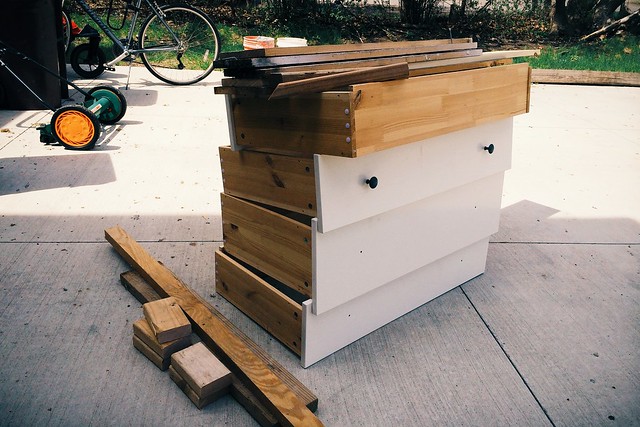 We owe this project to an ill wind in June three years ago. When we were married, Jessica moved here from Ontario and brought nothing with her but the suitcases we took on the honeymoon; the rest of her chattels followed a month or so later. Her dad did us the kind favour of hauling them over the border, piled on a rickety little trailer.

Unfortunately, he hit a bad patch of weather on the way. The wind held up the corners of the trailer tarp and the rain let itself inside. Books and clothes survived undamaged in their bins, but the Ikea dresser came right apart at the seams. We had to junk the dresser frame, but the drawers were in good condition; and, being too poor to be minimalists, we kept the drawers in the garage for scraps.

It wasn’t until a couple of years later, when we read Gardening Anywhere by Alys Fowler, that we knew what to do with the old drawers. The book has a simple plan for a composting bin, and Fowler makes a point of advocating reused lumber for projects like this (she made hers from skirt boards pulled from a dumpster). 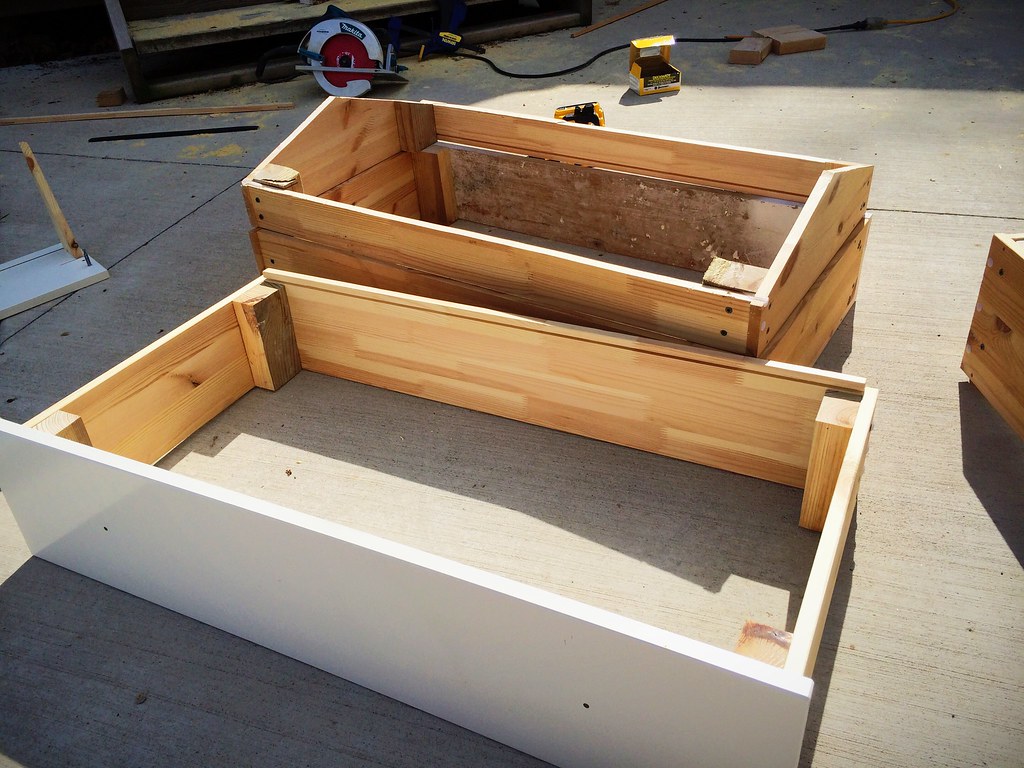 I screwed the blocks into the corners before removing the drawer fronts (which were made of flimsy chipboard) and replacing them with scrap 1×6.

The box is made in horizontal sections which are not fastened to each other. This is so that when you turn the compost pile, you can just pop the top sections off the stack and restack them in a new spot off to the side. You then scoop the compost heap into this new box, moving the sections over as you go, until what was the bottom section is now on the top. In this way you have completely turned the compost pile upside down with a minimum of mess and bother. 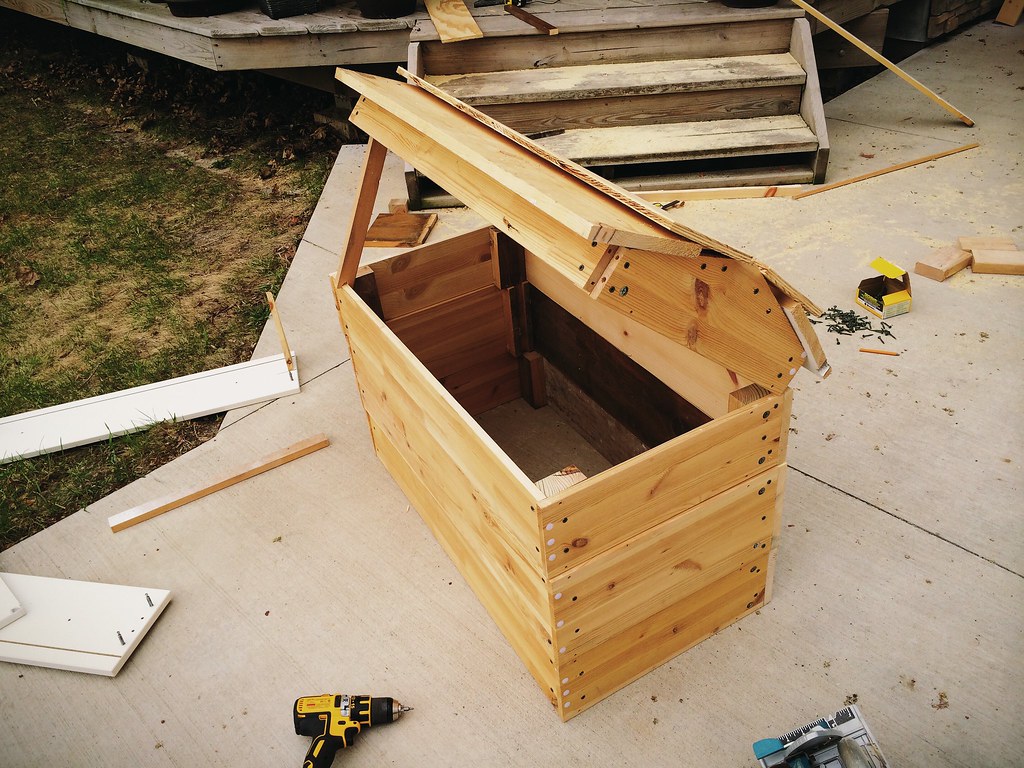 All the box needs now is a final bit of weatherproofing. I’ll be priming the whole thing inside and out, and then painting it with blackboard paint. Fowler’s book has lots of good advice for actually managing and using your compost, as well as being a great manual for growing things in general; you should find yourself a copy if you have any interest in getting into light, urban gardening. 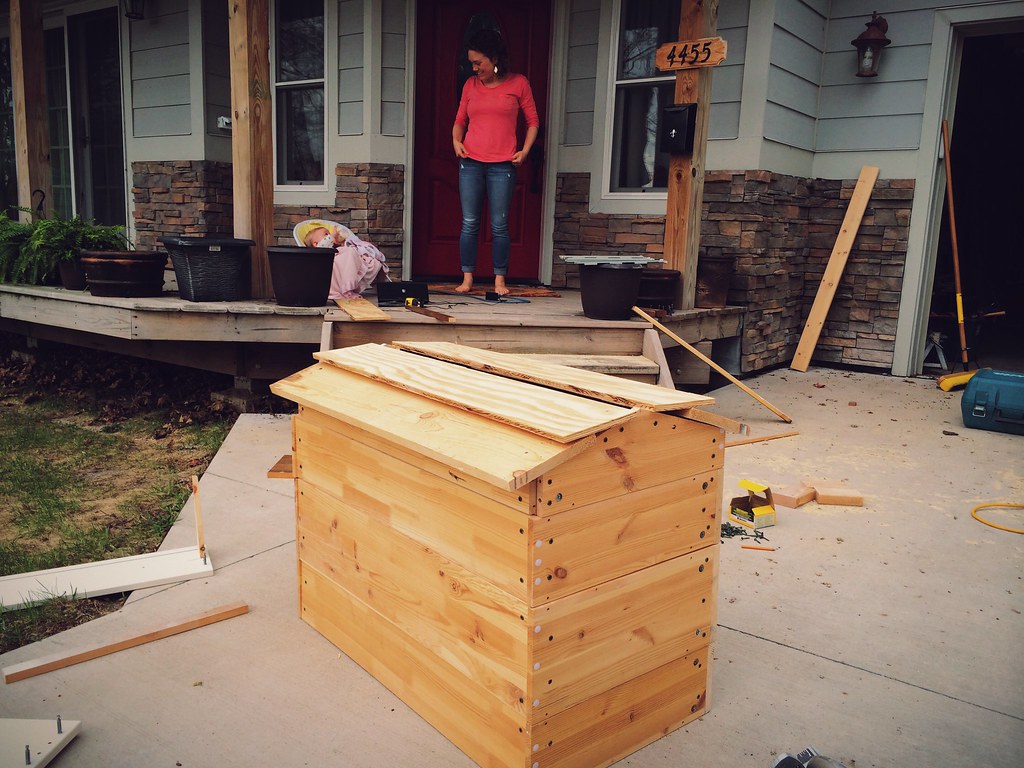 The complete box, closed. Fowler recommends a 2″ gap in the roof to let a bit of rainwater in, and to allow hot air to vent out.

Read more from The Blog